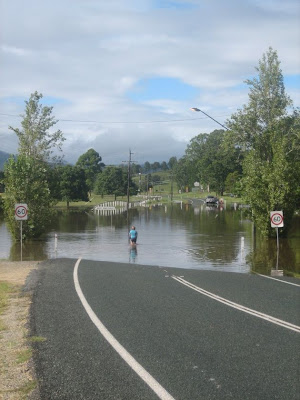 Told you the drought was broken.
A state of emergency was declared for south east Queensland overnight due to the worst floods in 20 years. Logan - considered a part of Brisbane - and the Gold Coast are under seige with the Logan and Albert Rivers breaking banks and expected to peak today.

Roads have been cut and people are preparing to evacuate whereas children are tearing about on rubber tyres and makeshift boats - it's the first big wet they've seen.

Hope that water not too deep for that cyclist !

Swimming and water awareness is deeply ingrained in the Australian culture with most kids in the water by the time they are a few months old.

Having said that, wild water is treacherous and crossing a flooded stretch is not recommended. However, kids know this and will stick to areas they know. The person in that photo did not cross but stuck to steady ground.