Watching the storm sail in and blow over. 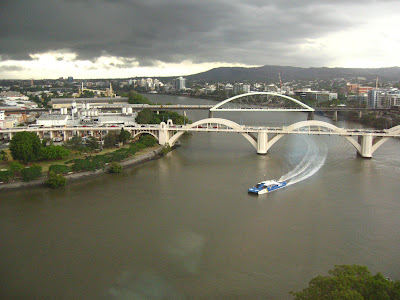 This photo was taken from the top of a building in North Quay which is a road that sits on the riverfront as winds on the outer rim of the CBD.

The first bridge you see is the William Jolley Bridge. William Jolley was Brisbane's first Lord Mayor. When the bridge opened in 1932 it was known as Grey Street Bridge because it joins Grey Street in South Brisbane to Roma Street which is on the western end of the CBD. It is a dual carriageway and the cars are going into the city. (Brisbane CBD is to the right of the photo).

The bridge behind it is the Merivale Bridge. It joins South Brisbane to Brisbane and is solely used for train crossings.

I will be covering these suburbs in future postings.

Super picture. I see the bridge is crowded, people trying to get home before the rain maybe?

Great photo. Where was it taken from? I love the City Cat - such a great way to get around. I lived at Highgate Hill for a while and used to take the Cat frequently - especially to get across the river.