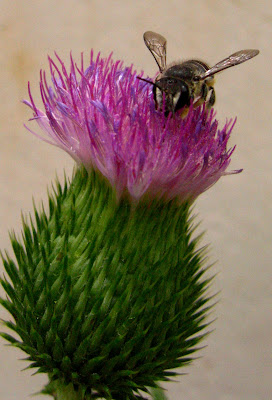 Oh the bee, very pretty and the little flower is sweet...
I missed Saturday's posting by half an hour (I do get out, you know) so I'm offering a second photo of the day for Sunday.

Much excitement in the garden this morning as a small fleet of native bees descended on my thistle bush. The former is a prize given that in the presence of European and feral Bumble bees it's very difficult for the smaller Australian variety to set up house, to see not one but ten of them all together was an event.

Naturally, I thought of you all and, leaving the washing on the line, rushed inside to get my camera and started taking pictures. 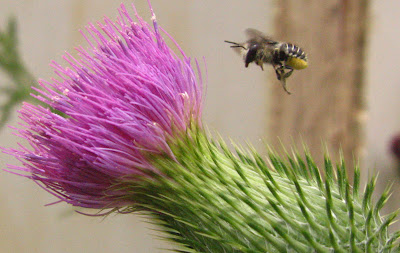 This particular type of bee is usually solitary. Males have five bands on their back, females have four. Both shake or divebomb the flower in order to obtain pollen. The shaking is often call "buzzing" where the bee clutches the head and literally shakes it. There's another action which I cannot find reference to in any book which I call divebombing. It's where the bee spots its target, circles it, backs up, charges the flower then dips and skims the top of it. It then turns around and does the same thing again. 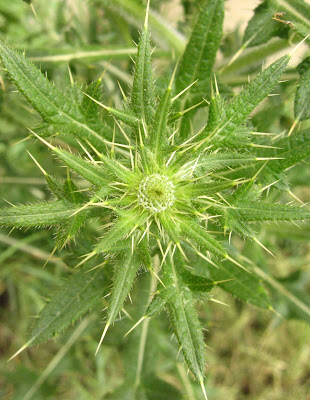 Thorny detail of the thistle 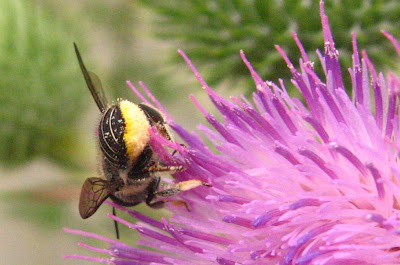 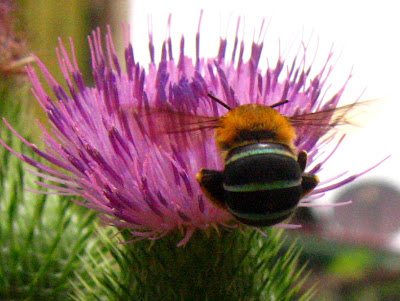 The bees just adore my thistle bush (my type is the Spear Thistle - Cirsium vulgare). Although regarded as a weed in Queensland, to me it stands in my garden as a king, it's proud pink plumage worshipped by a lapis lazuli of insects. It cannot be grasped and pulled from the ground as one would a weed for the thorns are very sharp - you but touch them with your fingertip and the sharp sting of the barb is felt. It's true what they say, no one harms it without punishment.

Those that call it useless are ignorant to its blessings. One can use the sap, leaf and floret for various needs and do so without danger.

So I leave it be - little flower of Scotland, tall and independent amid a small plot of other plants that would wish to overrun it.

The kettle whistles.
"Come and make yer cup of tea!" it cries.

I turn and walk inside. 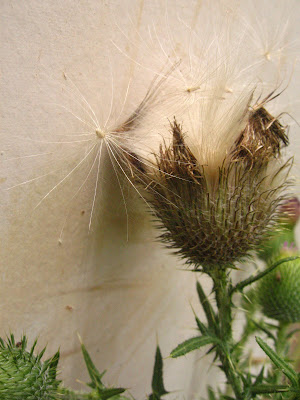 When the flower withers, the stem bursts open and brings forth seed, known as thistledown
but also known as 'Daddy Long Legs' in childhood language.

Your photos are spectacular. What patience you must have...

Barbara, setting up this blog was like recognising mortality - you realise you only have a very short time on this earth and a shorter time to learn about it.

Posting a daily photo made me see for the first time all over again the things I used to take for granted in a country I am grateful to be living in.

That you enjoy what I offer as a result makes the effort worthwhile and sweetly gratifying and I thank you for your kind words :)

Wonderful shots. I love the up close ones of the bee.